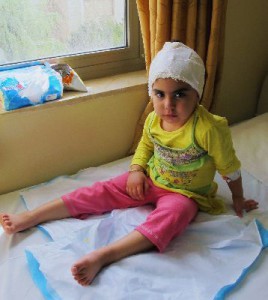 AMMAN- At Al-Jazeera Hospital in Amman, Fatima, 10, cried when she talked about what happened to her right eye, which is covered in bandages. Tears mixed with blood ran down her cheeks and onto her pillow.

“Don’t cry, sweetheart. You are so beautiful. Look at your new nail polish. Isn’t it lovely?” the nurse said. Fatima wiped away her tears, while the nurse continued whispering words of comfort in her ear.

Fatima was injured in a village in Daraa province, in Syria, a two-hour drive from Amman, during a bomb attack by President Bashar al-Assad’s forces. When Fatima’s mother desperately looked for her children, she found them all safe and unharmed, except for Fatima. The right side of Fatima’s face was severely injured, as well as her right arm. She drove her daughter to the nearest field hospital near the Jordanian border, where the doctors concluded that Fatima’s eye could not be saved.

“So they took us to Amman to take care of Fatima’s injuries. I left my four other children with my husband in Syria,” Fatima’s mother told Al-Monitor. “She will need plastic surgery, but we don’t know yet if that will happen because the hospital probably cannot afford it,” she added.

Obtaining funding is one of the biggest challenges for the Syrian medical ward, according to Dr. Badria Shikh al-Basatieh, a Jordanian with Syrian roots. After the war in Syria began almost three years ago, Basatieh immediately knew that the health care system would be affected. That is the reason she set up this ward.

“Getting surgery in Jordan is really expensive. Syrians cannot pay that, because most of the injured live in villages, and there are hardly any good hospitals left. Doctors have fled and hospitals have been destroyed. Here, in this ward the more complicated cases receive free health care. It is being paid by a Kuwaiti nongovernmental organization [NGO], but to be honest we are always short of money,” Basatieh said.

Basatieh works double shifts, and she looks tired. She is most worried about the problems injured Syrians face when crossing the Jordanian border. Syrians who receive free medical care in this Jordanian hospital were injured in Syria, near the border. The doctor shows a picture of an injured man.

“They wouldn’t let the ambulance cross the border, so I went there to pick him up myself. When we finally arrived at the hospital, a few hours later, he had died. We could have saved him if they would not have delayed us so much,” she told Al-Monitor.

The Syrian International Mercy Project in Jordan rents 35 beds at the Al-Jazeera Hospital. They also rent cheap apartments for the injured who need to recover after surgery. Almost every hospital in Amman now has an independent ward for Syrians, which are financed by NGOs in the Middle East and led by Syrian and Jordanian doctors.

“But you hardly see any Jordanian doctors. They ask too much money,” Basatieh disapprovingly concluded.

Amal, 4, is in the same room as Fatima. Just like her roommate, she has a head injury that required a complicated surgery in Jordan. The shelling happened in the village of Saida, in Daraa province, a few minutes after her oldest sister was killed, Amal’s mother Laila told Al-Monitor.

Laila did not have time to mourn her deceased daughter, who was only nine years old. Right after the shooting a few days ago, Amal was transferred to Amman. According to the doctors, she is doing well, although she has not talked since the attack took place. When the doctors left the room, Laila started crying while cursing Assad.

Some hospitals such as Akilah Hospital treat around 3,000 Syrian patients a month. The ward for Syrians at Akilah Hospital opened in November 2012 and receives $500,000 in funding every six months. This affords them two floors with 27 beds and Syrian doctors who are paid a fixed fee. The ward for Syrians is specialized in orthopedics and psychiatric care. Many injured Syrians suffer from war trauma as well.

One of the hospital wards is packed with 14 male amputee patients. Abdallah, 17, from Daraa province was injured three weeks ago. He and his brothers were working on the family farm when they were hit by a bomb. One of his brothers died immediately, and the other one was unharmed.

During Abdallah’s hospitalization, his leg was infected. He was transferred to Jordan by ambulance, where they removed the infected body part. Without any emotion, he talked about the attack and losing his leg. “Thinking about how unfair this situation is does not change anything,” he whispered.

“I only hope that the end of the regime is near,” he added.