Kurds flee for Iraq as Syria war slogs on 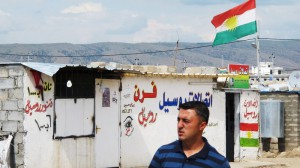 Duhok, Iraq – As Syria’s brutal civil war slogs on, some of the country’s ethnic Kurds have been fleeing the chaos and destruction and taking refuge across the border in Iraq. About 50,000 people live in the Domiz camp, located near the city of Duhok about 60 kilometres from the Syria-Iraq border. The camp’s residents are mainly Kurdish Syrians who do not want to participate in the war between Syrian President Bashar al-Assad’s troops and the rebel Free Syrian Army.

In Domiz, Kurdish flags wave on every corner, almost every refugee speaks Kurdish, and the word al-Qamishli – the name of a city in northeastern Syria from where many here have fled – is written on the walls. Compared to other Syrian refugee camps, like Zaatari Camp in Jordan, Domiz is cleaner and better-maintained. The air smells like freshly baked bread.

The camp’s residents have been through a lot. Abdelkader, his wife Emine and their six children are among the luckier ones: they were the first ones in the camp, and live in a stone cottage with electricity. Other refugees live in tents provided by the UNHCR.

Abdelkader’s store was destroyed when clashes between the Free Syrian Army and government troops erupted in the Kurdish part of Syria. Abdelkader looked for a new job, but couldn’t find any. The streets were abandoned and the situation became worse every day. 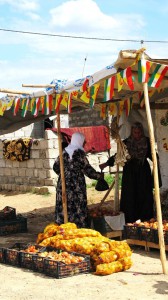 In a tiny kitchen, Emine prepares ten cups of tea for her husband and her neighbours in the camp. “The rich people in the camp share food, clothes, pots and pans with the poor refugees,” says Emine. “Our toilet is also being used by six other families, because they don’t have one. That’s the least we can do.” The neighbours nod and drink their tea quietly.

“One day I saw 20 dead bodies lying outside. They were shot by the regime or by the Free Syrian Army – who knows. On that day I decided to leave,” Abdelkader says.

He hugs his young daughter Zara and continues. “We didn’t go to Turkey because they don’t like Kurds. Domiz is our home now. The Kurds in Iraq don’t consider us as Syrians, but as Kurds.” A few months ago he even found a job in Erbil, the capital of Iraq’s autonomous Kurdish region.

‘Kurds are always the victim’

In a small supermarket in the middle of the camp, Ferida, a mother of four, buys milk and soda. She and her family members also left the Kurdish part of Syria a few months ago.

“The Free Syrian Army and al-Assad can do whatever they want. The only thing that I care about is that Kurds are always the victim. First in Iraq and now in Syria. We have set our hopes on the Kurdish President Massoud Barzani. He will help us,” she says and rushes back to the small tent she and her family live in.

The Kurdish regional government – led by Barzani – welcomed the refugees at first, but it has now become increasingly difficult to provide clothing, food and water for their growing numbers. As a result, most Syrians rely on the kindness of the locals in Duhok.

Twenty-two-year-old Ibrahim, a Duhok resident, is one of the volunteers who clean the camp’s streets four times a week. Like many other Iraqis, he knows what it’s like to be a victim of war. Under the regime of Saddam Hussein, about 100,000 Kurds were killed and during the 2003 US-led invasion of Iraq he lost many family members.

“It doesn’t matter if the refugees are from Syria or from Iraq: we are all Kurds. In 2003, a lot of Iraqis fled to Syria. They helped us during the Iraq War and after that. Now we are ready to do the same for them.”

Ibrahim hopes this war will result in a Kurdish region with an autonomous government, as in Iraq, and that the Syrians in Domiz can return safely. Or even better: that a fully independent Kurd state will emerge.

Others, such as 34-year-old Dilma, are more pessimistic about the future. She has no income since her husband was killed in an explosion, and completely depends on the help of others. Her children are hungry and sick, and the small tent where they live in Domiz can get cold during the nights.

“We regularly receive food and clothing from people in the villages, but it’s never enough,” she says. “My children only eat rice and bread. We never see any aid agencies over here. Maybe they forgot us.”

Dilma is also very concerned about the lack of clean drinking water. There aren’t enough doctors in the camp, and many young children here are sick and have rashes. In addition, many refugees are traumatised by their war experiences. During the night, Dilma’s children scream and cry because they miss their father. “But in Syria,” she says, “the situation is worse. I can still hear the bombings. I even dream about dead people.”

Despite the hospitality of the Kurdish population in Iraq, Dilma hopes she can return to Syria very soon. “If they kill Bashar al-Assad tomorrow, I will be the first refugee that leaves this place. I miss my old house and the grave of my husband. I want to be near him, even if he’s not alive anymore,” she cries.