Thousands of Syrian refugees in Jordan finally back in school

IRBID, Jordan — After years of trying to get Mohammed into a public school, his mother Alaa had almost given up. Since the family fled from Syria to Jordan in 2012, Mohammed has received no formal education. Year after year, school directors refused to sign him up for several reasons. Mohammed still doesn’t know how to read and write at 11 years old.

“In the beginning, they said they had no classroom space. Later, this changed to ‘Your son is too old,’ because Mohammed had been out of school for three years,” Alaa told Al-Monitor at her friend’s small apartment in the city of Irbid.

When the Jordanian government announced policy changes to allow thousands of Syrian refugee children access to education in August, Alaa was skeptical but decided to try again for this new school year. After five years of struggling, Mohammed was signed up at a public school in Irbid.

“The day after I signed him up, Mohammed jumped out of bed early in the morning to see if he could go to school that day. But his lessons haven’t started yet. They start on Sunday after the Eid holiday, so Mohammed has to wait just a little bit more. He is really excited,” she said.

Mohammed is one of the more than 91,000 school-aged Syrian children in Jordan left out of school last year. Things are now changing. To allow more Syrian refugee children access to education, the kingdom has taken several measures supported by international funding. One of them is that from now on, state schools are allowed to enroll Syrian children even if their paperwork is not in order, government spokesman Mohamed Momani told Agence France-Presse. Families can sort out their situations during the school year.

Jordan has also created special classes for some 25,000 children ages 8-12 who had been deprived of schooling for the past three years or more. Falling behind has been one of the barriers that complicated many Syrian children’s education. These new “catch-up classes” will prepare children to join their age group in just one year.

The measures were much needed, as some of the Syrian children in Jordan have never stepped inside a classroom. Mohammed’s younger sister, Roqaya, 7, was also rejected due to lack of space, unlike her twin brother Shallan, who managed to get in last year. When asked if she looks forward to going to school, Roqaya smiled brightly. She wants to be able to write her own name, she told Al-Monitor.

“I am so happy that all of my children are finally in school right now, especially because I cannot read and write myself. That’s why I think education is so important. I don’t want them to end up like me,” Alaa explained, adding that she got married 12 years ago at the age of 14. Her husband was 40 at the time.

“Maybe I should sign up for a women’s education program as well,” she added softly.

The longer children remain out of school, the less likely they are to finish their education, organizations like Human Rights Watch warn. Education is also crucial to protecting children in situations of displacement. In Jordan and other host countries, early marriage among Syrian girls is rising as a way to ease the financial burden of the families. Child labor in Jordan has doubled in the last decade.

To accommodate as many children as possible, the Jordanian Ministry of Education has opened an additional 102 schools that will work in morning and afternoon shifts, bringing the total to 200 schools across the kingdom operating double shifts.

“Although we don’t have the exact enrollment numbers yet, the response from Syrian families has been very positive. Before, the biggest problem was the waiting list,” Miraj Pradhan, a communication specialist for UNICEF Jordan, told Al-Monitor.

He said, “We are really glad the government of Jordan is leading the nationwide school enrollment campaign. Ahead of the start of the new school year, the Ministry of Education made it really clear that all children in the country, regardless of their background or status, are welcome to register in public schools.”

However, some challenges remain, according to Pradhan. “Despite the government’s best efforts in double-shifting schools, there are not enough schools to ensure that every child will be able to enroll nearby. We still hear from families that the classes are full. The Ministry of Education is planning to expand as well as build new schools, and they need the support of donors to ensure that every child in Jordan is in school,” he added.

Hagar hopes that there will be an extra school in her neighborhood soon. When she found out about the back-to-school program, she tried to sign her three children up, but they were refused. Due to the large numbers of registrations, classes were full. A huge disappointment, she said, because her sons Ayman, 10, Yamin, 9, and Ahmad, 8, have never received any formal education, not even before they fled Syria. They attend classes at a local center in Irbid only a few times a week.

“But they don’t teach them anything at the center. I am really upset. What will become of them?” Hagar asked bitterly.

She and her husband are illiterate, so home schooling is not an option. “The only school that has room for my three boys is really far away from my neighborhood in Irbid. We cannot go there every day. We don’t have any money. My husband is unemployed,” she added.

Her son Ayman might be small, but he has big dreams. He proudly told Al-Monitor that he learned how to count to 15 and that he can recite the entire alphabet. Although he has never set foot into an actual classroom, he is sure he will like going to school every day.

“When I grow up, I want to become a pilot. In school, they will teach me how to become one,” he said. 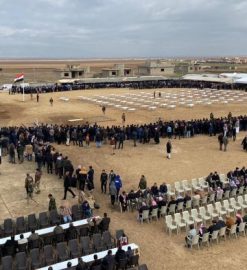